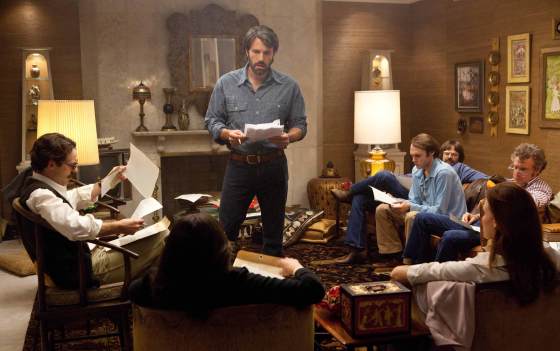 In Greek Mythology, Argo is the name of the ship the Argonauts sail to retrieve the Golden Fleece, and prove Jason worthy to reclaim his father’s throne.  In Ben Affleck’s new hit film, Argo is the title of a fake science fiction movie, or the best bad idea the CIA can conjure up to rescue six American Embassy staffers out of Tehran. It is a real nail biter, even though you know the ending, and peppered with great acting by John Goodman, Alan Arkin, and Bryan Cranston.

I love this type of movie where limited dialogue and stoic facial expression mysteriously communicate an emotional message. Ben Affleck as Tony Mendez, a CIA “exfiltration” specialist, will be an Oscar nominee even if his six-pack (viewed in one shirtless scene) is makeup made.

In November of 1979, Jimmy Carter was President and my children age four and two. I watched Laura and Luke’s wedding on General Hospital, not the evening news, and militants storming the U.S. embassy in Tehran. The movie credits the United States giving safe haven to the ex-Shah of Iran for medical treatment, for erupting Iran citizens to a frenzy. They break down the embassy door and take fifty-two American hostages. In the midst of the chaos, six Americans manage to slip away and find refuge in the home of the Canadian ambassador.

Tony Mendez’s job is to get them out of the country.

The initial plan is to give them all bicycles and they will pedal to the border. Tony points out the border is 300 miles away and the road unpaved. The bicycle plan is not only the worst bad solution, it’s stupid. The tires would wear out.

He has a better bad plan; a scheme that surrounds a fake movie, Argo. He attempts to convince superiors this is the best bad plan, arguing others are: horrible, terrible, dreadful, none are good, some are god –awful, miserable, and the worst; the travel by bike. The Argo movie plan is crappy, and no good, but the best.

According to the government, in this situation there were no good solutions, just the best of the bad.

Tell that to the six Americans who left Iran, safely.

8 thoughts on “The Best Bad Plan”