In January, Mr. Wonderful and I turned to each other and said, “Gee, I wish we could sell the house.” January 11th we sat with a dear friend, who is a realtor, and signed the papers.

No fooling, April 1st, we received and accepted an offer.  Our wish came true that fast and we scrambled to find a living place with enough space for our “stuff.”

We fell in love with a Villa apartment about 15 miles north of Halifax Plantation in Hammock Dunes.  It was everything we said we never wanted, a gated community, no garage, no attic, no recycling and because a second home for many owners, alive on the weekends.

However, there are flowers galore, and no weeding (a harmful addiction I have struggled to overcome). We would give up 1200 sq. ft. of screened lanai living area, say good-by to barbecue grilling, and empty the water-bed.

We were not, unhappy, just conflicted and now renters.

Mr. Wonderful hired Two Men and A Truck for moving day, and got a Budget rental truck to transport numerous boxes plus other stuff to Eagles Nest storage facility, while I cried and sold treasured belongings, including the gas grill, on Craigslist.

We have grilled for the past thirty-five years. Yes, with snow on the ground and in the garage protected from downpours.

We started in 1977 using a Hibachi on an apartment balcony in the Bronx.  Hibachi is what Northerners call a small charcoal table grill. You still see them in State parks. Before Mr. Wonderful came home from work, I started the charcoal briquettes in a one pound coffee can that had both ends removed. I filled the can with ten charcoal briquettes, squirted lighter fluid at them, and struck a match to ignite. In a half  hour, they were hot enough to spread out, add more briquettes, and grill a chuck steak.

After a debate about sneaking a grill on the 10 by 12 foot apartment balcony, a George Foreman grill became an option. 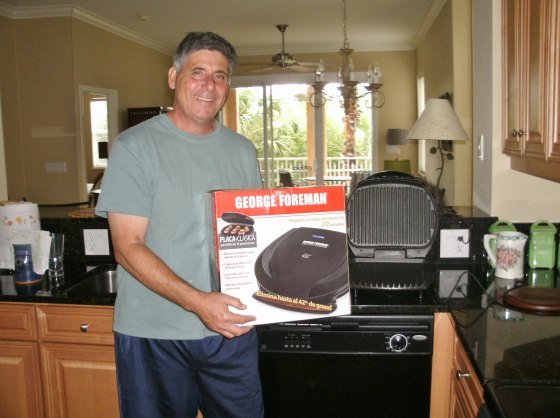 I was skeptical about a cooking device designed by a man punched in the face for a living who named all six sons George, after himself. Surprise, surprise, the grill does a nice job.  Evidently, George has become an expert and there are forty or more models to choose from.  We might have to upgrade.

We have been here ten days.

While unpacking, I realized we no longer use, but are attached to some ‘stuff’.

The packed silver set is a good example. Include, three sets of stainless steel unpacked, and we have thirty-six, dinner forks, salad forks, knives, teaspoons, and soup spoons; a total of 180 eating utensils.

Well, I am still making pasta salad for eight; hoping more than two will show up.

7 thoughts on “Careful What You Wish For and George Foreman”