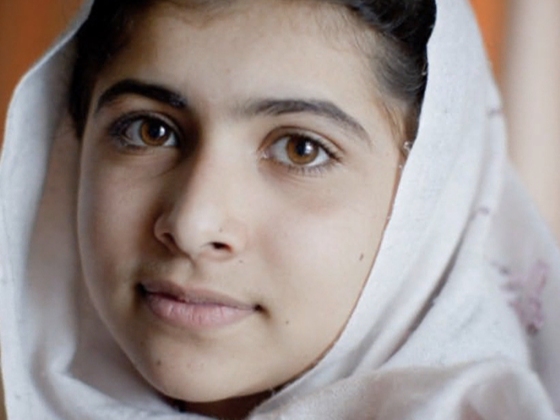 “I am Malala,” the title of a book, written by the Pakistani girl shot for championing girls’ right to education, has become a familiar slogan. Malala has addressed the United Nations, been interviewed by Diane Sawyer and John Steward, and visited with the Obama family. She was a 2013 Nobel Peace Prize nominee and runner-up for Time “Person of the Year.” Frida Ghitis, a writer for CNN,  considers her not getting the Nobel Prize a missed opportunity by the committee.

Malala has been a crusader for girls to be educated, since 2009. She published her journal, with the help of her father and teacher, Ziauddin Yousafzai, under the pen name of Corn Flower and become well-known. The Taliban threatened by her beliefs attempted to kill her in October 2012, as she rode the bus to school.

If you have not heard her speak, please listen now on youtube. The grace, poise and maturity that go with her wisdom is extraordinary. She sums up the absurdity of men shooting children because they fear books, paper and pens and defending their behavior as religious.

Malala is like the child in Grimm’s “The Emperor’s New Clothes” exclaiming the Emperor is not wearing any. Her father’s response when asked if he put his daughter in danger was, “Where were the others?  Ziauddin said he did not expect to fall in love with his daughter, but did, the first time he looked in her eyes, and named her for the mythological hero who led her people to victory.

Severely injured, Malala was flown to Queen Elizabeth Hospital in Birmingham, England for treatment.  She believes, “God and the prayers of many, many people,” spared her. During her three-month stay, she underwent many surgeries and a cochlear transplant to restore her hearing. When Diane Sawyer asked about her condition and more surgery, Malala explained there is talk about improving her smile and feeling in her face. Then the young girl’s eyes grew softer and she said gently, “Diane, I am recovered.”

During Malala’s United States visit, I received an email about attending “Girl Rising. The film, not a documentary, presents the stories of nine girls from around the world, and emphasizes education as key to their survival. Although the invitation stated that Malala was not in the movie, I went eagerly and assumed she was involved in the educational aspect.

The film is uplifting and depressing, but drives home the necessity of education for girls. In many developing countries girls are not allowed to attend school. Considered a burden by the family, girls are often sold or bonded into labor by their parents. One story is about a five-year old child bonded by her parents for twenty-five hundred dollars. The money bought a used truck for her brother. Others are married at eleven years of age or fall into sex trafficking because of  their lack of skill and knowledge.

When the movie ended, the audience was informed they could go on-line at Rising Girl to make contributions.  I checked out the website, and everything about “Girl Rising” is impressive. Many celebrated writers and actors take part in the project originally called “10×10”. The website clearly states the organization’s mission; “We use powerful storytelling to deliver a simple, critical truth: Educate Girls and you will Change the World.” The money raised goes to that effort.

Girl Rising, Girl Up and The Malala Fund are inspiring and encourage young girls to help each other. Although the missions are similar, The Malala Fund is an independent non-profit organization supported by the United Nations Foundation and Girl Up.

The first Malala Fund Grant awarded this year provides for 40  girls, ages five to 12, who would otherwise be engaged in domestic labor, or at high risk of entering the workforce in Pakistan, to attend school. The organization works with the families to enrolled the girls in school and provide school uniforms, shoes and learning materials. Each family will receive a monthly stipend.

Malala Yousafzai is not alone with her passion but has a gift of courage, humility and wisdom to speak the words, “They thought the bullets would silence us, but they failed. And then, out of that silence came thousands of voices.”

*Girl Up is an innovative campaign of the United Nations Foundation. We give American girls the opportunity to become global leaders and channel their energy and compassion to raise awareness and funds for United Nations programs that help some of the world’s hardest-to-reach adolescent girls

17 thoughts on “Malala, Girl Up and Girl Rising”