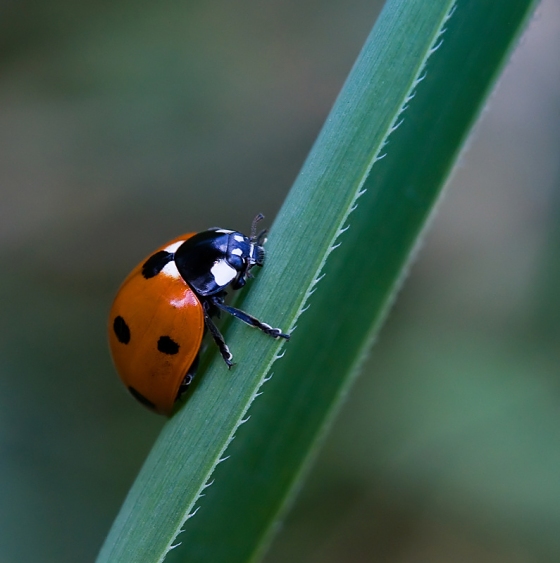 This  photo inspired my poem, I saw a bug colored red, white & blue, and hope you do too!

Can an itsy bitsy bug be patriotic?
His red, white, and blue symbolic,
A political view
Understand freedom . . . be equal too

Like a school age kindergartener
Raise his hand to hold the flag
Chosen, glad with honor
Knows to say a prayer

Can an itsy bitsy bug be patriotic?
Puff his chest, recite the pledge
Listen to a voice within
Battle for the helpless, or let the bullies win!

Can an itsy bitsy bug be patriotic? 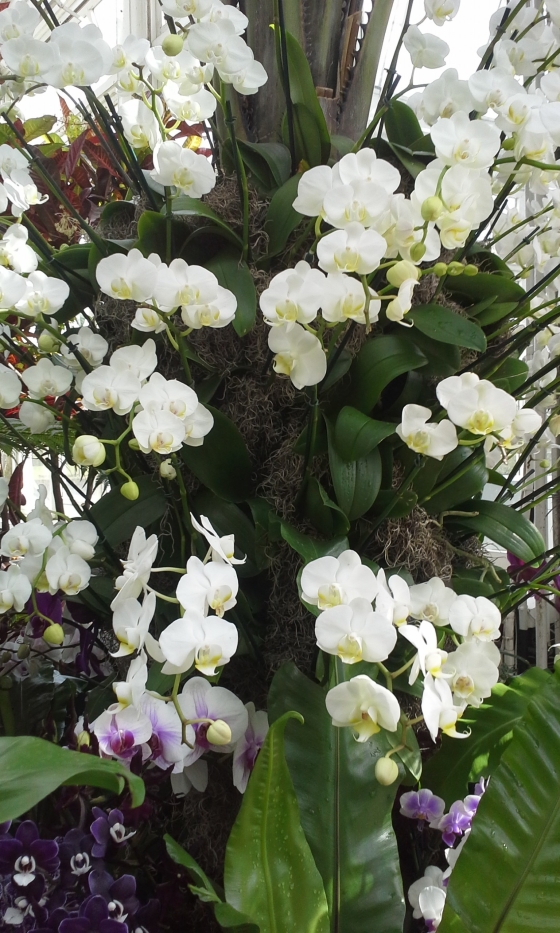 Rose joined her friend already seated outside at the Hudson Garden Grill. The restaurant known for its ambiance and gourmet menu was contained within the Bronx Botanical Gardens where they planned to attend the Orchid Show after lunch. Hugh clay pots dripping with colorful annuals decorated the patio and cardinals danced with the breeze.

“You’re late,” quipped Joan handing her a menu, “I ordered us drinks.”

Rose sighed and said, “How did you know what I wanted? I’m dieting.”

“You always order a Bloody Mary with lunch. Joan argued, “If you prefer, I’ll drink yours. Really Rose, this is when you thank me, apologize for being late, and explain why . . . . . like, maybe your cat threw up.”

Rose leaned forward and lowered her voice, “Can you Squat?”

Stunned Joan shook her head then blurted out, “Can I squat? Have you lost your mind? I can’t put on my underwear standing up,” as the server appeared with their drinks and interrupted the conversation saying, “Hi, I’m Chantal and I will be your server.” Dressed in a v-neck black tee and a tan khaki skirt she wore a smile from ear to ear, a pen was tucked inside her hair bun.

Rose was hungry. She had not eaten before the incident than did not have time after, but nevertheless asked the server to give them a few minutes.

They discussed the menu choices and after deciding Rose would have Chicken Paillaid, Joan the Lobster Bolognese, raised their glasses to toast the occasion. Joan’s first grandchild had been born on her seventieth birthday and she had been busy attending CPR classes for infants and signed up for the course on installing child car seats.

When Joan paused, Rose attempted once again to get a response to her question, “Can you squat?”

Rose rubbed the back of her head reminded of the morning’s incident, “Squat as in your butt is nearer to the floor than your knees. It’s concerning, things are going downhill fast, soon we won’t be able to fix our own meals.”

“That’s why there is take out Rose, and surely you have heard of Meals on Wheels. I can open a jar of olives now that I have that rubber thing,” Joan offered with pride.

Again, Rose leaned forward and whispered, “This is serious, can you squat? I can no longer squat. Well that’s not totally true, I can squat just not get up from the squat.” Her voice faded as the server arrived with their entrees.

Joan suctioned her glass with a straw and motioned the server they would have two more drinks.

Nursing the celery topped Bloody Mary’s Rose explained, “I have this vertigo thing going on, and bending over causes dizziness. Today I said to myself, ‘self don’t bend over, squat’ and did. But I couldn’t get up and when my thighs were screaming with pain let go of the counter and fell hitting the back of my head on the floor.”

“Tom was playing golf. I crawled into the dining room and leaned on a chair to get upright. It was exhausting and reason I was late.”

A patron on their way to the restroom stopped to comment, “The same thing happened to my husband, on the golf course. He forgot he wasn’t twenty-four and squatted to line up his putt, it wasn’t pretty.”

Joan attempted to offer condolences, saying, “You poor thing. You must have a bump.” But giggled instead, putting her hand over her mouth and apologized for laughing. Rose not knowing whether to laugh or cry joined her. Soon their laughter was drawing attention.

After paying, they toured the orchid show, took the train ride to see the azaleas, and visited the gift shop.

On the ride home, Rose wished she were young again.

To Be Young Once More

Remember we’d drop to the floor

Get up and dance, afraid of wetting our pants and giggle some more

Our faces would ache as spirits soared

Oh to be young once more

Now it’s difficult to stand and everything is sore

Not just back, knees, and feet, but ear lobes, eyebrows and seat.

We can no longer squat to pickup something dropped

We linger then limp to a chair wondering, when did we get this old?

Family and friends remark, “Easy to say from Florida.”

They may be right; nevertheless, beautiful winter scenes created by the recent blizzard bring me happiness and serenity.

I found myself reciting Robert Frost’s poem, “Stopping by Woods on Snowy Evening.” 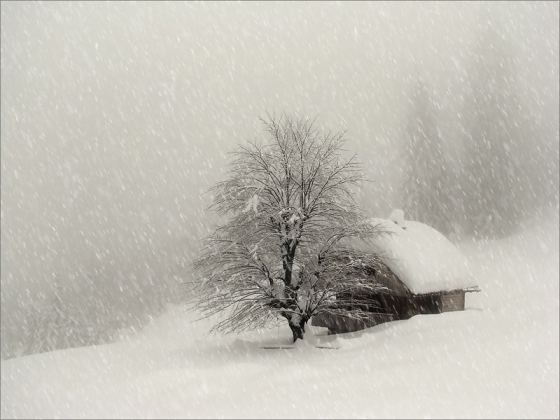 Stopping By Woods On A Snowy Evening

Whose woods these are I think I know.
His house is in the village, though;
He will not see me stopping here
To watch his woods fill up with snow.

My little horse must think it queer
To stop without a farmhouse near
Between the woods and frozen lake
The darkest evening of the year.

He gives his harness bells a shake
To ask if there is some mistake.
The only other sound’s the sweep
Of easy wind and downy flake.

Frost found words to express a feeling so special it has ownership. Not his, but one to be shared.

The line, the only other sound’s the sweep of easy wind and downy flake, sparked my poem;

Remember that sound after snow falling  . . . never there

Autumn Along the Hudson

Come out of town with me
And see what is always there to see
Mountains covered with trees
But, add color!

The air is crisp, the breeze fragrant
We climb the twisted bends, the crunch of leaves beneath our feet
Background music for what lies ahead.

A parting of trees, then pasture . . . a view of the Hudson
Midnight blue water framed in yellow, orange, and red
Autumn on the river

Come out of town with me
And see what is always there to see, the mountains
But, add color!

I have been out of town, visiting family and friends in New York and New Jersey and wrote this poem upon returning. Other than being patted-down at Newark airport for having nitrates on my hands, the trip was perfect. Security asked if I toted guns. I do not, but did pet my friends hunting dog, Louie. That is the closest explanation I could find to testing positive for a bomb residue, and turns out Louie’s owner hunts exclusively with bow and arrow; go figure.

The trip began at the Emerson Spa and Resort near Woodstock. The weather was cool and we slept with the windows open, under down comforters, to the sound of a babbling brook.

Hyde Park was our next destination. We lunched at the Culinary Institute and toured Eleanor Roosevelt’s cabin, Val-Kill, as well as the home of Thomas Cole and the home (Olana) of Frederic Church, his student.

We stayed at the Beekman Hotel in Rhinebeck and managed to tour Wilderstein, the home of FDR’s friend Daisy before leaving. After watching, the recent PBS special on the Roosevelt’s being in the area was an ideal culmination of events.

“Its effect is like that of a higher thought or a better emotion coming over me.”
By Ralph Waldo Emerson
. . . just saying

Shopping for Bread in a Hardware Store

But no, no bread!

I asked a man for help.
The man scratched his beard and said
“Lady you are in the wrong store.” 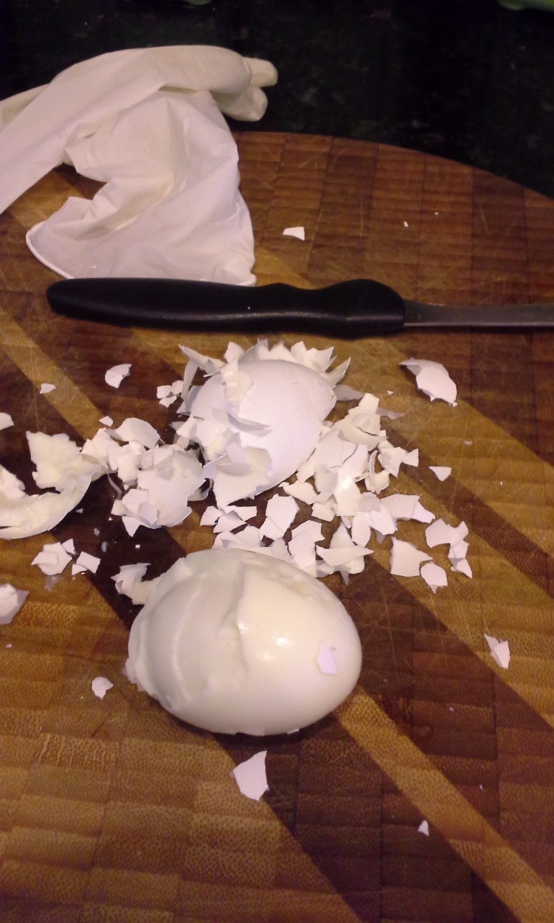 On a recent trip north, Mr. Wonderful and I stopped at a rest area in West Virginia. A  pamphlet, “County Cookbook”,  was in a rack of free brochures and I took one. I was intrigued by a recipe for picked eggs, and remember seeing ruby red eggs  in large glass  jars back in the seventies, but  never ate one.  At home I gave pickled eggs a try. Peeling the hard boiled eggs took more than an hour. There was cussing and swearing!

Pickled eggs caught my eye, Why?
Simple, pickled eggs can be a treat!
But . . . first you need the pickled beets

Like Shakespeare’s Lady Macbeth
An iridescent show of color.
Looks good to eat . . . except!

Tiny pieces in disarray
Pray, persuade, the outer capsule to pull away
The boiled mass to shed its skin
Woo, entice, lure, and then give in

Like Macbeth confused about the crown
Egg and shell needed time to cool down
Why did pickled eggs catch my eye?

This photo inspired the poem. I saw a bug colored red, white & blue, and hope you do too!

Can an itsy bitsy bug be patriotic?
His red, white, and blue symbolic,
A political view
Understand freedom . . . be equal too

Like a school age kindergartener
Raise his hand to hold the flag
Chosen, glad with honor
Knows to say a prayer

Can an itsy bitsy bug be patriotic?
Puff his chest, recite the pledge
Listen to a voice within
Battle for the helpless, or let the bullies win!

Can an itsy bitsy bug be patriotic?

This poem was written after viewing John Oliver’s  you-tube video about net neutrality.  Oliver is hilarious explaining how important things are often boring and consequently do not receive our attention.  I myself, missed the initial boo ha ha. You may need to view his rant first, the link is below as well as embedded in words John Oliver.

A quiet Mob shakedown by Comcast and Verizon
Millions invested in the scam
A drug cartel takeover, forget about creating bans

What are you talking about. . .
Keep equal access, equal.
The internet is already one speed

The FCC seeks public comments
Your opportunity to vent
Or write a politician,
Mozilla Firefox will make sure your letters are sent.

Is the Summer Solstice Silly?
Well, we still can have fun.
A vacation, or staycation, not to offend anyone.
The feverish dog days of summer are coming,
Steering wheels burn hands and flip-flops sting feet.

The latest CBS bulletin; we won’t enjoy more sun,
But will miss the needed sleep.
Not to worry, on/off button  is in the future
And they make covers for hot leather car seats.