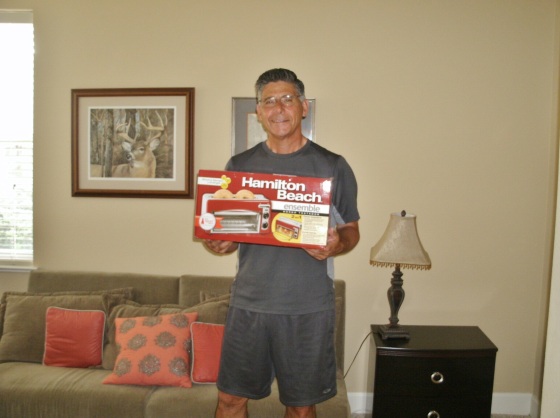 “Honey, I’m home,” yells Mr. Wonderful* as he parades himself through the front door carrying a boxed Hamilton Beach toaster oven I requested he buy. I meet him in the kitchen as he continues saying, “You’re gonna love it,” his chest buffed out, ready to strut his feathers like he is a peacock.

“Yes, $37.99.” He answers and reaches for a sharp knife to cut through the cellophane tape.

I point to the bold lettering on the box.

He says, “What’s the difference? They didn’t have a red one. Black, red, it makes toast, heats rolls, melts cheese.”

He says, “Who needs a statement? I want toast in the morning, ordinary, plain toast. I add cherry jelly if I need pizzazz. Dull and ordinary is just fine by me.”

She says, “Fine? As in average, common and mundane. I want better than fine. Red adds color, interest against the black granite. I’ll take it back, where’s the receipt?”

He says, “What difference does it make, nobody sees it. It’s a toaster.”

He says, “Claudia, that’s not what I meant, you’re being ridiculous, why can’t you ever be happy?”

She says, “So I’m a ridiculous unhappy nobody.”

She says, “It doesn’t matter what you said, what you meant was, STOP being a pain in MY butt and settle for ordinary.”

He says, “Geezzzzzzzzzz, What if it only came in black, you’d have to be happy with black.”

She says, “Now I should fake it, pretend I like humdrum black. Did you look for chrome? Chrome, at least chrome would be different.

He says, “You’re right. I’ll take it back. Why be ordinary? God forbid we’re ordinary. Whatever you want. If a red toaster oven makes you happy, I’m happy too. Yada, yada, yada”

*Mr. Wonderful is my husband of 42 years.

P.S. You can read the history of the toaster at The Toaster Page.

9 thoughts on “O is for Ordinary – The Alphabet Series”